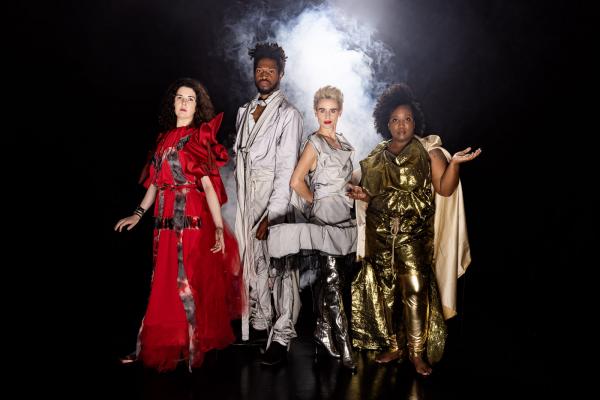 Bring your doubts, fears, champagne and charm as the Apocalypse is suspended in a decadent spectacle... A darkly funny, electric new play with live music.

"It seems the world is ending / this you’ve noticed oft before / have you considered that you’re spending far too much time indoors?"

With levity and sincerity, “Death’s Cabaret” invites you to toast the end of the world as one of the Four Horsemen of the Apocalypse, Death, has decided to take a little break from being a Messenger ushering in The Last Day.

Imbued with magical realism, this satirical spin on the Apocalypse imagines the Horsemen as a well-acquainted cohort who, through the millenia, have come to know one another’s scandals and secrets, proclivities and guilty-pleasures.

Creators and performers, Lori Baldwin and Aaron Reeder, illuminate the narratives of these apocalyptic horsemen, interweaving historical and contemporary issues while investigating fear of the unknown. In these unprecedented times, “Death’s Cabaret” offers a perspective of transition. Is this THE END— of life, of war, of lack, of policing?