A NEW VENUE FOR BERLIN

The Theater im Delphi is a venue of exceptional character. For decades forgotten, the building, built in 1929 as a silent movie theater, was reawakened as an international cultural center in 2012 by the artist duo Nikolaus Schneider and Brina Stinehelfer. Today, not only films are shown, the program includes theater, dance, opera, concerts, performances, film and many hybrid projects. Artists from Berlin’s independent scene find space in the Theater im Delphi for experiments, new room and sound experiences. The space becomes a muse for new artistic ideas. The Delphi in the guise of the legendary nightclub from the 1920s, the Moka Efti in the TV series Babylon Berlin, is world-famous. 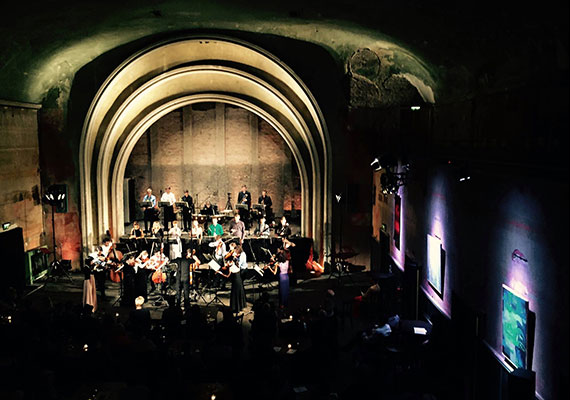 When we discovered the Delphi in 2011, our reaction, just like most of our visitors, was a mixture of fascination, enthusiasm and inspiration. One year later we opened the doors with a room-inspired opera. Demands for “more” became louder and louder. A unique production in an abandoned building became a life project. Many hands and heads and hearts were at our side. They helped us to bring the Theater im Delphi to where it is today.

The former silent film theater Delphi is not only our space, it is also yours: it belongs to the cultural heritage of Berlin – and its future artistic face. We are open to concepts and ideas of all kinds, from large scale public artistic events to private celebrations, conferences, concerts and everything in between. If you have a concept and the means to realise it, we can help you bring it to life. We are also always on the look out for new team members. Internships in production, technical direction, public relations and more are always available. Also, as a non-publicly-funded, not-for-profit arts institution, we always welcome financial and structural support. For queries about artistic events or internships, please contact Artistic Director Brina Stinehelfer at brina@per-aspera.net. For queries about commercial/private events or joining our board of directors or body of funders, please contact managing director Nikolaus Schneider at nikolaus@per-aspera.net.