Cancelled: UPROAR! - A Dada Flight Out of Time 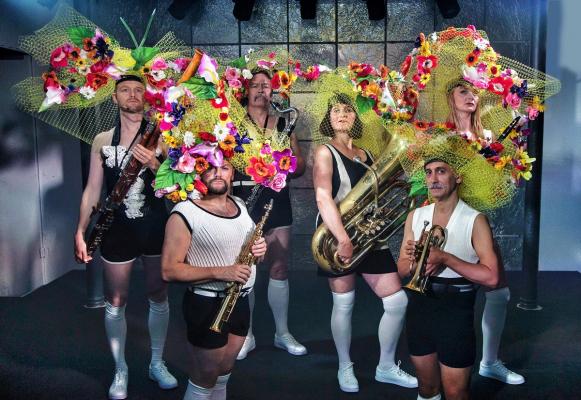 Cancelled: UPROAR! - A Dada Flight Out of Time

The UPROAR! tour has been cancelled. Already paid tickets will be refunded.

Around 100 years ago, the Dadaists ran amok in Zürich. In the summer of 1920, the First International DADA Fair was held in Berlin. It marked both the pinacle and the end of the Berlin DADA movement. Now it’s time to bring DADA back to Berlin. The British-Danish live art ensemble Livingstones Kabinet is inspired by the revolution of non-sense to create a new musical theatre performance: UPROAR! The group calls us to artistic rebellion against time and against our political present day. They will do this with song, music and DADA noise in a humorous, absurdist and politically astute cabaret performance, in which the spirit of DADA rises up and takes on new form in the year 2020. With the German premiere of UPROAR! Livingstones Kabinet invite the Berliners to take a break in which we will pay tribute to the imagination, that which is askew and out of shape.

Following the success of "The Einstein of Sex" in 2018/19 at the Theater im Delphi and Haus der Kulturen der Welt, in cooperation with Magnus Hirschfeld Society on the occasion of "150 Years Magnus Hirschfeld", Livingstones Cabinet will once again present a premiere for the first time outside of Denmark at the Delphi theatre. Livingstones Kabinet are a core-funded British/Danish live-arts ensemble established in 2000 and based in Copenhagen, Denmark. The group is jointly led by Danish director Nina Kareis and Scottish composer Pete Livingstone. Together with a core group of associated artists they create performances which are cross-disciplinary and define their own scenic language. Their work is characterized by an image-rich, tight¬ly-choreographed staging style, using original live and recorded music together with sound design. Whether narrative or non-narrative, their pieces often employ elements of collage, playing with time and the order in which events are presented. Observers have commented on a sense of the absurd, the incongruous and a flawed, yet beautiful, humanity which permeates their work.

Music Theater
In Danish and English with German Surtitles