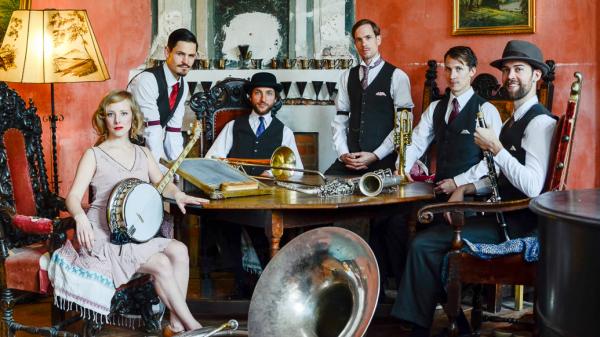 sophisticated spectacle with love for detail! The Berlin Sextet is dedicated to the most beautiful pearls of hot jazz and ragtime of the 1920s and brings them with original arrangements and heart blood to the connoisseur with musical taste of yesterday. At this special concert at the Theater im Delphi they will be joined by the Scottish singer Alison Affleck. rufus-temple.de/

Delphi they will be joined by the Scottish singer Alison Affleck.
Since its founding in 2016, the Rufus Temple Orchestra has played its way into the hearts of the Berlin swing dance scene, looking back on numerous concerts in clubs and festivals and regularly touring all over Germany. In 2017, the sextet released its first studio album and gave guest performances in the international TV series "Krieg der Träume" (ARTE, ARD, BBC), which was broadcast in September 2018. At the beginning of 2019, the Rufus Temple Orchestra was the studio band for the audio book production "Die Juten Sitten" (Audible) and the computer game "Through the Darkest of Times".