A lovely cabinet of curiosities with uncanny atmosphere 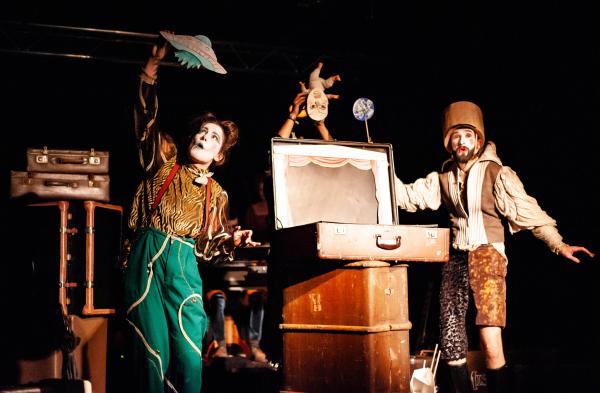 A lovely cabinet of curiosities with uncanny atmosphere

Just be lazy and gluttonous? Just blow dry your cravings? Just let reality be a dream! Come with us on a little vicious journey into the world of digressions.

On the path of unhappiness, lazy performers in worn-out clothes and stingy rodents talking their heads off await you. Witness vengeful bouquets of flowers and wooden heads brought to life. Join us in setting off fireworks of good humor and nasty sounds. Let's wallow together in the cabinet of curiosities of sins!

In a highly impostor-like manner, the team around "The Seven Deadly Sins" collectively takes the thematic complex of morality and sin under its wing. A whimsical ensemble of characters approaches the hearts of the audience with small steps and lots of music. True to the motto: Pride comes before the bang!

---
Dorothea Wagner studied theater (University of Leipzig) and has been working as a freelance director in the Leipzig theater scene since 2014. They were nominated with "Peace or Fantastic Bugs and Where to Find Them" for the Heidelberg Theater Days Award 2017 and for the Saxon Amateur Theater Award 2018 and with "Candide or The Last of All Possible Worlds" for the Leipzig Movement Art Award 2017.

The ensemble of "The Seven Deadly Sins" is made up of freelance theater and music professionals from Leipzig and Frankfurt, who developed the piece collectively. The piece is at home between music, puppet and spoken theater, with a big foot in physical puppetry and a penchant for playful and funny evenings.