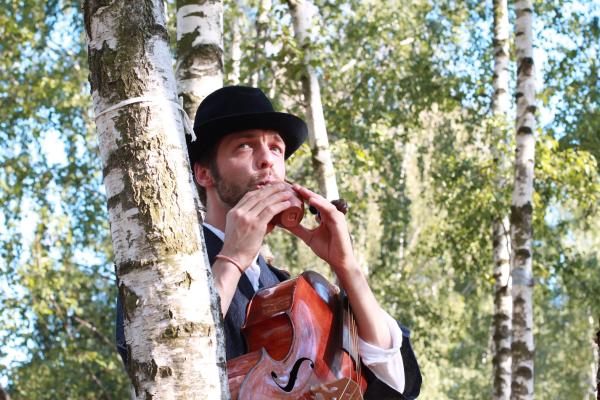 The first Chinese-Rhaeto-Romanic solo opera! Micro-intervallic music by Harry Partch and David Eggert combines with an enchanting narrative based on the poetry of the double Po. This is surprising and hilarious!

The Moon tells a young man what he heard during his journey. With scenes, images and music, it takes us on a journey into the poetic world of the Chinese Li Po (Li Bai 李白 (701-762)) and the rhaeto-roman Chasper Po (1856-1936). Follow this fantastic tale of loneliness, longing, love, friendship, drinking and hallucination. The fine music is by Harry Partch and David Eggert and resounds in the shimmering colours of a tonal system derived from the overtones, sometimes with tiny, irregular intervals.

---
David Eggert, who grew up in Canada, is professor of violoncello at the Bern University of the Arts and musical director of the music theatre Opera Lab Berlin.
Hsuan Huang, who grew up in Taiwan, completed her stage design studies as a master student at the UdK Berlin and is regularly engaged by opera houses in Germany as a stage and costume designer.
Konrad Dietze works as a lighting designer for festivals as well as for independent theatre and opera productions in Germany and abroad.

"The humorous music theatre by Eggert, Huang and Dietze [...] combined the poems of the Rhaeto-Romanic and Chinese Pos dramaturgically, scenographically and musically in such a perfectly coordinated structure that one thought one could hear the entirety and the individual poems at the same time - a Chinese-Rhaeto-Romanic hallucination that resonated for a long time". (Engadiner Post / Posta Ladina, 2021)