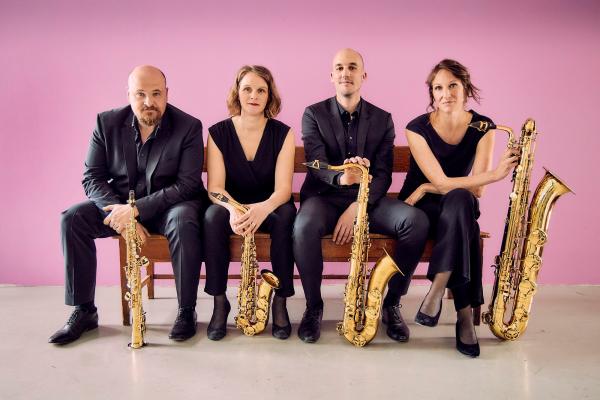 Performances include Kurt Weill: Marie Galante and other of his songs, Bohuslav Martinu's "Three Songs for the Red Seven Cabaret", Arnold Schönberg's "Brettl-Lieder", Benjamin Britten's "Cabaret Songs" and some songs by Moisés Simons.

---
It is obvious why the four musicians from Berlin are called "clair-obscur".
Clair-obscur, a painting technique from the Renaissance, in which opposing light
and dark tones are used to symbolise heavenly and earthly elements, is the visual equivalent of the sounds the quartet draw from their instruments: on the one hand, warm, intense and clear, and on the other harsh, aggressive and robust. These two poles can also be found in the composition of the quartet: two female and 2 male musicians in one ensemble create a unique musical energy.

The main focus of the group is chamber music. With the support of their mentor and teacher, viola player of the Artemis String Quartet, Prof. Friedemann Weigle, clair-obsur has developed into a highly sought after ensemble, playing venues such as the Philharmonie, Berlin and the Carnegie Hall, New York, first playing here in 2006. The ensemble concentrates not only on original works written for saxophone quartet but also greatly expands and enriches its repertoire with unexpected transcriptions and stunning arrangements.

Clair-obscur is however, not only well known for chamber music but also for their individual, original and self produced Music Theater works. They are often found on stage performing Camille Saint-Saens "Carneval of the Animals together with the actor Boris Aljinovic. Even more theatrically demanding is their version of the ballet "The Wedding on the Eiffel Tower (Les mariés de la Tour Eiffel)" by Jean Cocteau, in which the concert becomes a caberet and the musicians, actors. Here they not only impress with musical virtuosity but also with mimic, wit and body language.
As well as this, the four quartet members can regularly be heard in orchestras such as the Berlin Philharmonic.Clair-obsur have been rewarded for their artistic excellence with prizes in competitions such as the International ADMC Competition Illzach (2007), the Gaudeamus Music Competition (2007) as well as the Prize of the Friends of Jeunesses Musicales 2008.