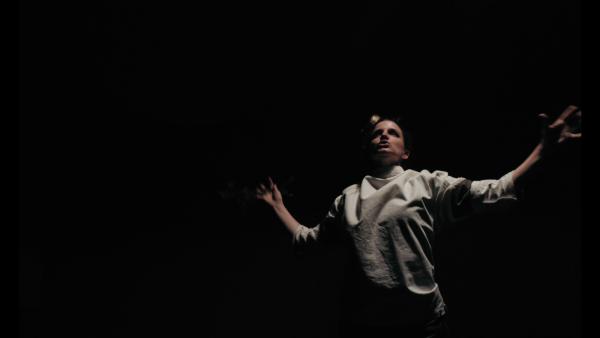 The music theater collective Hauen und Stechen was invited to stage the first Latvian national opera together with artists from Riga: They follow the life of the young partisan Banuta between alienation and rejection, pagan love rituals and the self-determined desire for happiness.

Hardly rescued from the war, the young partisan Baņuta loses her newly wed husband to a revenge killing. The plot overturns: visions of death and magical signs, alienation and rejection, prohibitions, oaths, pagan love rituals and the self-determined desire for happiness determine her life in a foreign land until the end. A mythical past confronts the experiences of the wars of the 20th century in Eastern Europe, whose struggles did not end, especially for the women, even after their return from the front.

In the summer of 2020, the scenic concept was first adapted for a film that fuses opera, music theater and contemporary performativity, which will be shown next door in a matinee performance at the Brotfabrik. The new production of the opera by Alfrēds Kalniņš can now be seen for the first time in Germany - live at the Theater im Delphi.

---
HAUEN UND STECHEN
The music theater collective HAUEN UND STECHEN was founded in 2012 and works on a new music theater language that is engaged and expressive in terms of content and aesthetics. The focus of its artistic work is the intensive examination of classical opera works and their translation into disparate art spaces and the polyphonic sound world of a collective. The collective has performed at venues including the Stuttgart State Opera, the Bavarian State Opera, the Théâtre de l'Athénée in Paris, the Deutsche Oper Berlin, the Sophiensælen, the Neuköllner Oper and the Ballhaus Ost, as well as in cellars, a disused brewery, barracks, garages, a painter's apartment, a Swiss hotel, the Akademie der Künste Berlin and in a car.

A production of the music theater collective Hauen und Stechen in co-production with StoryHub. Funded by the Hauptstadtkulturfonds, Goethe-Institut and VV Foundation and supported by „Sansusī“.