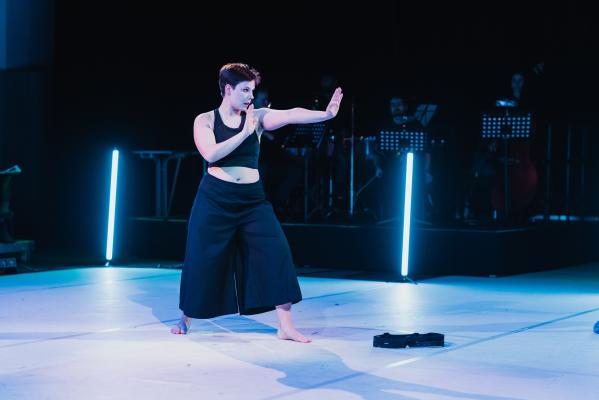 A fresh feminist rewriting of the Nibelungen narrative that explores the dark reason for the so called Nibelungentreue.

Why does the invincible warrior Brunhild lose all her strength on her second wedding night in the frame of the from Nibelungenlied? What is behind the secret alliance of King Gunther, Siegfried and Hagen? What is the blank space, what is actually unsaid, in this tale that has been handed down for over 1000 years?

In order to be able to ask these questions, the LYRIDEN*18 sample the most important texts and stories about the figue of Brunhild, rearrangeing them in old and new languages and in the most different time and style levels. The myth of Brunhild is rewritten on stage by six actors and a small live orchestra to rehabilitate the figure of Brunhild as what she once was: a strong woman and warrior.

---
The Lyrids*18 is an open music theater ensemble founded in 2018 by Uta and Marcus Hertneck in collaboration with Olga Riazantceva-Schwarz to develop interdisciplinary projects such as dance theater performances, choreographed vocal concerts, experimental short films and text-based theater pieces together with other freelance artists. The projects focus on overwritings that deal with toxic narratives of the theatrical canon and the present, in order to then feed them into the background noise of narratives in a new texture.