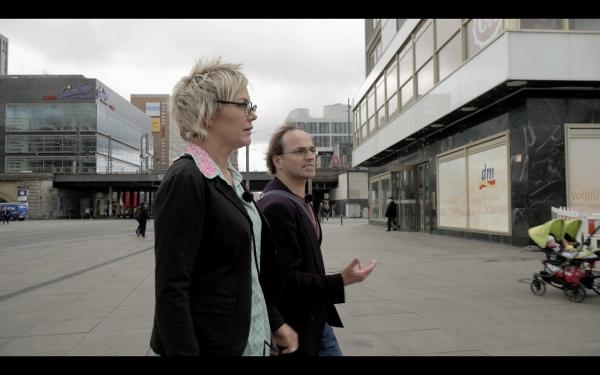 This is what happens when curiosity about a country that has disappeared from the map continues to burn: Wiesbaden-based filmmaker Jörg Buschka, with paternal roots in Brandenburg, sets off for the former GDR for five very personal and whimsical encounters with people from contemporary history. How united are we really?

In 1989, Buschka felt like the original discoverer Leif Eriksson in the year 1000 AD when he had just found a new continent. But then it disappeared - along with its Stasi prisons, but also the precious niches in which people had preserved values. Buschka wants to lift and look at this treasure in „Zeig' mir Deinen Osten!“ Shot in direct cinema with only one observing camera, the film captures conversations about major topics as well as incidental and private matters.

Stories from the time before the Wall was built, of colorful gumball machines, matchbox cars, "Besserwessis" and "Jammerossis" come together with perspectives on the transformation region of Görlitz or the famous "Montagsdemonstrationen". Heated discussions about the many facets between obedience to authority and resistance meet with stories about paternalism and expropriation by the Treuhand or life as a cabaret artist in the GDR and what it was like to be particularly successful just as the Wende came.

After the film screening, Buschka and his protagonist, the singer and entertainer Inka Bause, will stay for a talk.

-------
Jörg Buschka lives in Wiesbaden and works as a filmmaker for TV and cinema productions, also realizing corporate films and web series.
In 2007, he was nominated by the "V.i.S.d.P." for the "Golden Prometheus" Media Award as Online Journalist of the Year for his series "Buschka Discovers Germany" and received the "Critics Award: Best German Series" at the international digital series festival "Die Seriale" in 2019 for the second season and und 2021 "Best Documentary" at the Seoul Webfest.