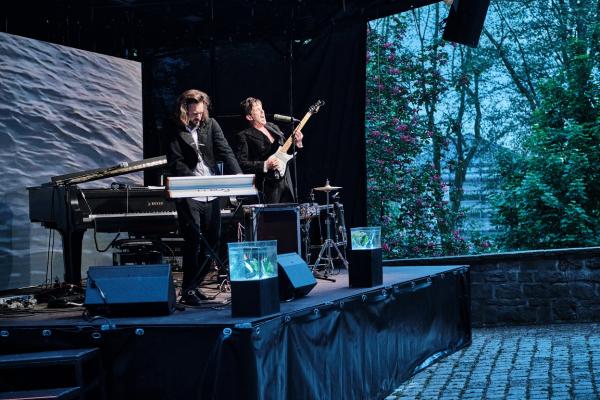 At the center of this music-theatrical production are the two artists of the century, Hölderlin and Beethoven, born in 1770. What if they had known each other, what if Hölderlin's madness had met Beethoven's mania?

Beethoven left behind more than 700 compositions. His songs often seem pale, well-behaved, meaningless. His instrumental and symphonic works, on the other hand, are groundbreaking, even today. Hölderlin, also born in 1770, is considered one of the most important German literary figures. What if the two had known each other, what if Hölderlin's madness had met Beethoven's mania? This evening will examine Beethoven's and Hölderlin's oeuvre for intersections and areas of friction. The question arises again and again on which pedestal Europe has placed these artists and what it is actually made of. The result is stylistically immanent classical compositions and unusual avant-garde sounds, which are broken across genres and allow the work of the two to merge into a new Gesamtkunstwerk. The setup is enhanced by visuals by Wilhelm Rinke.

----
OMG Schubert are Konstantin Dupelius and Justus Wilcken, who have made it their mission to rethink and reinterpret the Lied & Lied duo in terms of composition and performance. As multi-instrumentalists, singers, actors and composers, they perform at the Salzburg Festival, Theater Freiburg, Staatstheater Hannover, Schauspielhaus Düsseldorf and Schauspiel Stuttgart, among others. Their second album WTF 1770 will be released in November 2021.

The concerts are made possible by the kind support of the Ilse and Dr. Horst Rusch Foundation.

"A dynamically modern and dreamy evening and a very successful poetic essay with a fantastically organic dramaturgy, which succeeds in leading through these thoroughly disparate and idiosyncratically brought together texts and compositions. And whose great merit is to create a parallel universe in the process..."
Cordelia Marsch, SWR 2 (7.6.2020)