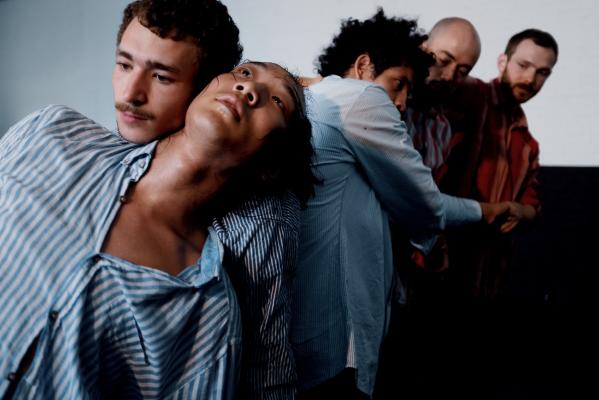 What does it mean to be a man? The multidisciplinary dance theater performance "Big boys don't cry.... but when they do?" is an artistic invitation to redefine masculinity in our modern world.

Influenced by the art disciplines of dance, circus and music, the traditional image of masculinity is questioned in a sarcastic and theatrical way. What does it mean to be a man? What impact do education, emancipation and equality have on masculinity?
Six men of different nationalities sift through behaviors, expectations and traditions. Inspired by stereotypical movement patterns, social roles of men are examined and portrayed with the help of various dynamics.
Improvising, the guitarist, Sebastian Vidal, reacts to the different moods of the performers and created images.

----
Marion Sparber is originally from South Tyrol and completed her dance training at the Iwanson School and Varium. For over fifteen years she has worked internationally as a dance teacher, choreographer and dancer. After her training, Marion danced for several choreographers, including Francisco Córdova, ADN-Dialect, Stella Zannou and Sonia Rodriguez. For the last six years Marion has been promoted as a choreographer by the Office of Culture of South Tyrol and produced by IDEA- Tanz Theater Performance under the direction of Doris Plankl. She has shown her pieces at numerous international festivals.